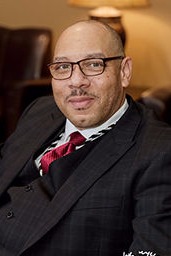 Pastor Elmer Hess, Jr. is a vital part of the ministry at First Pentecostal Family Worship Center. He serves as Co-Pastor, Minister of Music, Youth Leader, Christian Development Leader and Men’s Department Advisor. He is a man of mission who works to reflect God’s glory in every aspect of his ministry.


The uniqueness of his music ministry mirrors his deep love for God. Pastor Hess, Jr. has devoted his life to being an example of a Godly man who exhibits Godly strength and character. He is a fervent prayer warrior and intercessor who serves with humility. His anointed teaching and preaching ministry is one of repentance and deliverance.


Pastor Hess, Jr., earned a Bachelor of Business Administration Degree in Accounting from Western Michigan University and was employed by the State of Michigan as an Assistant Auditor General before retirement. He also earned a Master of Arts Degree in Biblical Studies; a Master of Divinity Degree; and a Doctor of Ministry Degree in Expository Preaching and Pulpit Communication, all from Trinity Theological Seminary. Pastor Hess Jr. and his wife, Anita, have three children: Elmer III, Leiah (Augustus III, Augustus IV, Ella, Silas) and Kaylie (Ashton, Taylor, Ava, Isaac).